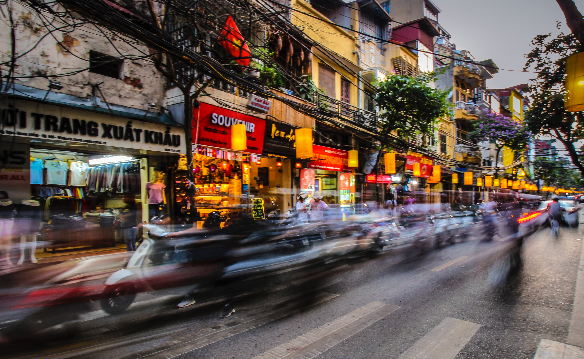 Just four short months after praising Vietnam as an economic development role model to North Korean leader Kim Jong Un, US President Donald Trump aimed his trade cannon at Hanoi, dubbing it ‘the worst (trade) abuser” in the world during an interview with Fox Business on June 26. On 3 July, the US Commerce Department slapped tariffs of up to 456% on selected steel imports from Vietnam, accusing the country of fraudulently acting as a transhipment hub for South Korean and Taiwanese steel manufacturers trying to circumvent US anti-dumping and antisubsidy tariffs on those two countries.

At this stage, the jump in tariffs on Vietnamese steel exports to the US will probably do more psychological damage than economic harm. Less than 1% of Vietnam’s exports to the US will be affected by the recently applied tariffs. But concern levels are rising in Hanoi, as government officials worry that the US could slap punitive tariffs on larger import categories from Vietnam – among others electronics, aquaculture products, footwear, textiles and garments -- based on the same allegation of transhipment fraud.

Hanoi is right to be worried. According to both Vietnamese and foreign economists, abuse by the Vietnam’s Customs Department in enforcing rules of origin is rife. Many intermediate or almost finished products imported into Vietnam have only minor transformation or value-added processing done to them in Vietnam, and yet are still able to get “Made in Vietnam” certification when being re-exported.

Although the US and Vietnam apply different approaches to determining ‘rules of origin’, there is a widespread view in Hanoi that bureaucratic inefficiency and weak enforcement capacity are the main culprits in creating what is becoming a growing transhipment risk for Vietnam. Further punitive tariffs on Vietnamese exports would erode Vietnam’s export competitiveness and potentially have a knock-on effect on GDP growth.

According to discussions AGA has had in the past week with Vietnamese economists and officials of both the government and Communist Party of Vietnam (CPV), the government is hastily putting together a set of responses in an attempt to fend off further US sanctions. They include:

As ever, Vietnam will need to carefully calibrate its efforts to mollify the sanctions desk at the USTR such that they don’t trigger any repercussions from its neighbor to the north, China, Vietnam’s largest trading partner. On 3 July, the same day the US announced the punitive tariffs on imports of selected steel products from Vietnam, the Haiyang Dizhi 8, a Chinese geological survey vessel, steamed into what Vietnam claims as its territorial waters to carry out seismic surveying, accompanied by four Chinese coastguard vessels. Vietnam responded by sending two of its own coast guard ships to try to prevent the seismic surveying from going ahead. At least some in Hanoi saw the Chinese move as a signal to Hanoi not to over-react to the latest US tariff moves, especially with regard to military training and equipment purchases. None of the officials in Hanoi that AGA spoke with believed the timing of the Chinese incursion was coincidental.